Located between the flatlands and the hills, the Oakland neighborhoods are some of the most affluent in California. With a population of approximately 412,000 people, the area is home to 131 neighborhoods with Shepherd Canyon being the most populous.  Oakland is made up of the Central business district, East Oakland, Lake Merrit, North Oakland, West Oakland, and Oakland Hills.

Oakland is considered to be one of the most diverse cities in the whole of the country. It’s also thought to be one of the best cities as far as outdoor activities are concerned. This is great news for families and individuals who love the great outdoors. With so much to offer everyone, it’s no wonder that Oakland, California is a great place to live.

But where exactly should you live? There are so many neighborhoods to choose from that you may not know where to start looking. The good news is we can help you make a decision. Below you will find a list of some of the best Oakland neighborhoods to live in. If you’re thinking of moving to Oakland you may want to consider some of these neighborhoods.

Top 7 Neighborhoods to Live in Oakland 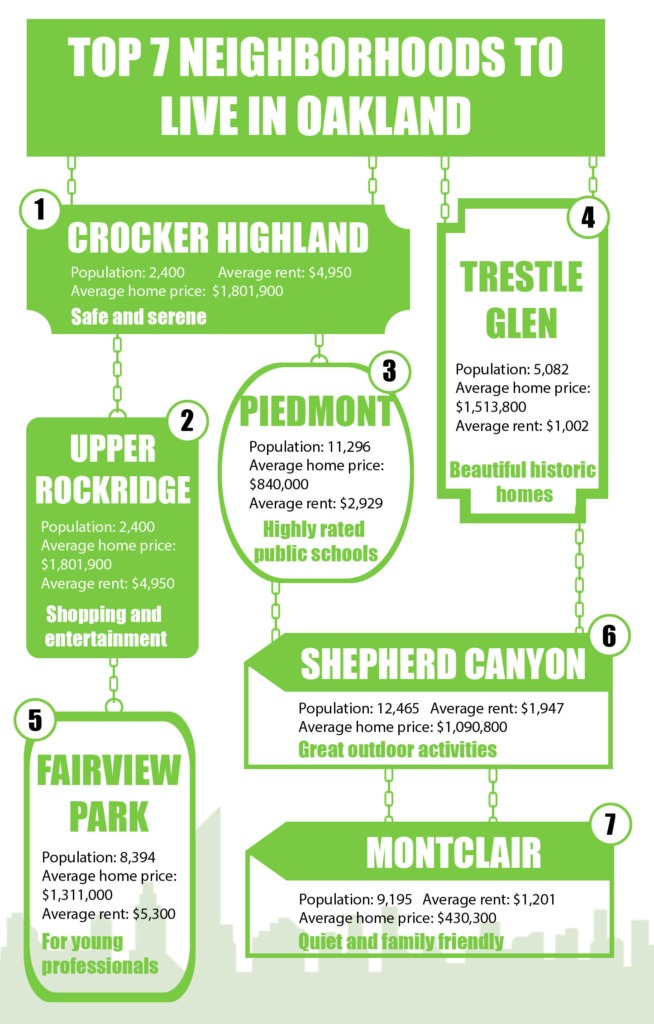 Located in Alameda County and considered to be one of the best places to live in California, Crocker Highland is very charming and has an old movie set feel to it. This makes the area feel safe and serene. If you’re looking to live somewhere very quaint you may want to consider moving to Crocker Highland. Complete with a walkable neighborhood and tree-lined streets, Crocker Highland consists of many homes that were built in the 1920s and 1930s.

Most people in the local area own their home and the area is a very safe place to live. Most people have a master’s degree, and many of the locals are retired.

South of the Berkeley city limits and east of Telegraph Avenue, Upper Rockridge is home to some buildings that date back to 1909. This makes Upper Rockridge one of the oldest neighborhoods in the area. Named for the rocks at the end of the shutter ridge on the northern side, Upper Rockridge is a very safe place to live and is home to 68 public schools, many of which have an A+ rating. If you’re looking to get your kids into a good school you may want to move to Upper Rockridge.

There’s a good sense of community in the neighborhood and while the cost of living is quite high there are a lot of amenities in the area helping to keep everyone entertained. There is no shortage of parks, shopping malls, fitness facilities and coffee shops in Upper Rockridge which helps to make it an appealing area to live.

Located in Alameda County, Piedmont is a semi-suburban area and is home to 5 schools. The area is low in violent crimes and was known as the “City of Millionaires” in the 1920s. There are still a few buildings in the area that date back to the 1920s.

Found near the Hayward Fault and with a total area of 1.7 square miles, Piedmont is surrounded by Oakland. Considered to be a good area for families and relatively good as far as housing is concerned, Piedmont is the ideal place to live. This is especially the case if you want to live somewhere that has particularly good schools.

Found east of Lakeshore Avenue and with streets that are laid out in a curvilinear pattern and make the area stand out a little. Trestle Glen has an urban feel to it and is home to many families which may appeal to those who want to live somewhere friendly. The cost of living in the area is higher than in some areas but there are many amenities and the local schools are considered to be quite good. In fact, there are 42 public schools serving the area and some of those are considered to be very good.

Developed in 1916, Trestle Glen was originally known as ‘Indian Gulch’ which was known as a border town. The nearby creek was part of the border of the Brooklyn Township, however, these days the creek is predominantly underground.  With an interesting history and a nice urban feel to the area Trestle Glen may be the ideal neighborhood for you.

Fairview Park is thought to be one of the best areas to live in Oakland, CA and is located in Alameda County. The perfect place for young professionals to live, the area is home to many coffee shops, bars, parks, and restaurants. This makes Fairview Park the ideal place to be for those who like to go out from time to time and socialize.

With schools that are known to be above average and with locals that tend to be quite liberal, Fairview Park has a relatively low crime level and usually sees a lot of good weather throughout the year. While the cost of living is high in the area, it is appealing to both young families and young professionals alike.

Home to the Shepherd Canyon Trail which is ideal for those who love the outdoors, Shepherd Canyon is one of the best places to live in California. Most of the locals own their home and most of them are retired. With an urban feel to the area, the town has very few children but the local schools are quite good.

There are many amenities in Shepherd Canyon for those who love to stay active and there is also a good nightlife. The whole town is ideal for families as its a relatively safe place to live and there are some great outdoor activities that can keep everyone entertained.

Found along the western slope of Oakland’s hills, Montclair is also known as ‘Montclair Village’ or ‘Montclair District’. Home to a large forest, large homes and winding streets the area has a lot of Tudor, Danish, Rustic, and mid-century styled homes. The area is home to some very high ranking schools making it ideal for young families.

Considered to be a very quaint place to live, relatively safe, and quite family-friendly if you want to live somewhere quiet, Montclair could be the ideal location. The area is an expensive place to live but there are a lot of amenities which should appeal to locals and visitors alike.

The above Oakland neighborhoods are some of the best places to live. They all tend to be quite safe and have low levels of crime. You’ll also find that many of these neighborhoods are very liberal and forward thinking making them ideal for young professionals and young families.

If you are considering moving to Oakland you may want to think about moving to one of the above areas. Consider how much the homes cost and how close you need to be to the center of town. You may also want to take a look at the schools and determine which area has the better schools. If you’re looking to have a lot of outdoor adventures you may want to consider moving to Shepherd Canyon. However, if you are looking for an urban feel then Trestle Glen could be the ideal destination. Finally, if you would like to live somewhere that is very pretty you could consider living in either Crocker Highland or Montclair.

If you are looking for professional services to move within Oakland or to relocate from another city in California, our professional Oakland movers will be ready to help. Contact us to get best rates and quality services.